The controls of the web version are:

The demo is 'Chapter Zero', and not planned as part of the main game (so it won't spoil anything). It was difficult to strike a good balance with a demo, and some things will definitely change in the full game, but we really hope to give you a good idea of the quality. (Please help us improve the game with your feedback!)

For the most dedicated secret-hunting players, your mission is to find Azure, a secret crossover character from the upcoming and beautiful indie platformer Orange Island. If you manage to find her and collect her friendship card, please let us know!

Web version is running in a modified version of GBA.ninja by Simon Paris which is based on VBA-M by Forgotten and the VBA/VBA-M development teams.

For more information please see our Kickstarter campaign or our website.

Good luck for the release.

It's nice and well made.

A great game that really brought back memories. I still own the device with a bunch of games like Earthbound Zelda and Tetris.

And I hope to produce more games for the device gba because it is a wonderful device, no matter how outdated

I kinda dig this game. I've never played a lot of platformers before so this is kind of a new experience for me. I think the controls work really well on keyboard and doesn't feel out of place or uncomfortable. I think the level design is really nice. I'm not sure on how to end the demo but is it by collecting all the collectables and giving them to he specific people? A really nice demo and can't wait to see the full release soon!

Thanks for playing, I admire your persistence! It looks like there's still a few things in the demo that are definitely too punishing. Especially the hitboxes of the rhino enemies - they shouldn't be able to kill you when they're dazed!

And yes, you're on the right track! If you decide to come back to it, try talking to the purple robot near the end of each route (he's not reachable on the gunless route though).

Controls for keyboard are super uncomfrtable, I guess it’s a great game but because I don’t have controller I can play it. Also there is missing key for charged boom-boom, so I can’t go pass that moment in game.

The s key charges on keyboard (standard GBA emulator controls). You can remap the controls if you download it though.

Thanks. Download what? How to remap controls? Sorry if I’m being annoying.

IT IS SOOOOOO CUTE!!! I LOVE HOW HE JUST WADDLES AROUND THE MAP WITH HIS TONGUE STICKING OUT :))

itch.io, can you please create a default collection called "my favorites" so I can add this in??? 😃

I will buy a copy for my switch!!!

i lost a lot of times, but i loved to lose.

I absolutly loved playing this! can't wait for the final game!

Wow! Can't wait to play it. It really has the vibes of Robo Gato and I want another game like that.

Wow! I will totally try to support this on kickstarter, i played it a while ago, and it has come so far! Also, the .cia file is a really nice toutch, thanks for adding it!

Well, that was an amazing game...what a great job

Yo amo a los perritos

Wow. This game is great! The reduced screen size was a bit of a pain at first, but I came to appreciate it as a way of both paying homage to the teeny GBA screen as well as promoting safe exploration and always looking ahead. The level designs were great (including reusing levels for various challenges without certain gear, and using the same obstacles to restrict the path of other gearless runs), and I enjoyed finding all of the collectibles (and playing the bonus level) in that limited space. The game itself handles very well with crisp movement and responsive controls, and it looks and sounds just like how I would expect a "modern GBA game" would. I played in browser so I couldn't use my preferred WASD keybinds but I bet it would feel great on a GBA or an emulator. I'm really excited to see how the full game will turn out!

Thank you for including a .cia file! This will be so nice to play on my 3ds :D

As someone who is obsessed with gameboy games this is absolutely amazing! It's a really solid demo with fun, cute characters, fun to explore maze-like areas, and solid controls and physics! Would definitely recommend a health meter and maybe a sort of mini map to know where I have been already. Really great game and I really cannot wait to see how it goes!!!! :)

Thanks so much! We'll definitely add some kind of map, and the health is something we're thinking about (difficult to block paths with multiple hit-points, so may use checkpoints or some other solution).

This is the BEST game to exist

I'd love to hear more details on how you put together the "packed emulator" build of the game (I'd like to do something similar for my own NES games). Did you do a custom build? What were the steps involved?

I am also curious if you have looked into whether or not this "packed" build is something that Steam and other platforms would accept.

Hey! To make the 'packed' version we followed the steps to build RetroArch from source using MSYS2. For many reasons we'd have preferred to use a standalone GBA emulator, but they're all missing dynamic rate control which is crucial for a smooth 60fps experience.

The goal was then to get it as small as possible (RA is usually hundreds of MB). Looking at the available ./configure options there's a ton of features that can be disabled. We also changed the app icon and removed any theme assets that weren't needed.

RA likes to create folders and update config on the fly, so I'd recommend to commit the whole tree to a git repo before running, so you can easily see what's changed and remove the junk before zipping it up.

Finally, the launcher is just a simple Win32 program made with wnim, which copies the correct ROM for your language and launches the game like so:

With regards to Steam, I'm aware of other emulated titles being sold (e.g. Iridion II), so I'd be surprised if a game running in RetroArch was rejected, but couldn't say for certain.

That's amazing! Thank you so much!

Reply
Half Awake Games20 days ago(+1)

How do you develop Gameboy Advance games? I know about GB Studio and ZGB for Gameboy Color

For Goodboy we're using our own stuff in the Nim programming language, but the easiest way to get started with GBA dev nowadays is the Butano engine (requires some modern C++ skills).

Check out gbadev.net for a full list of resources!

Every game playable on the DS gets extra points in my book! A solid 11/10. 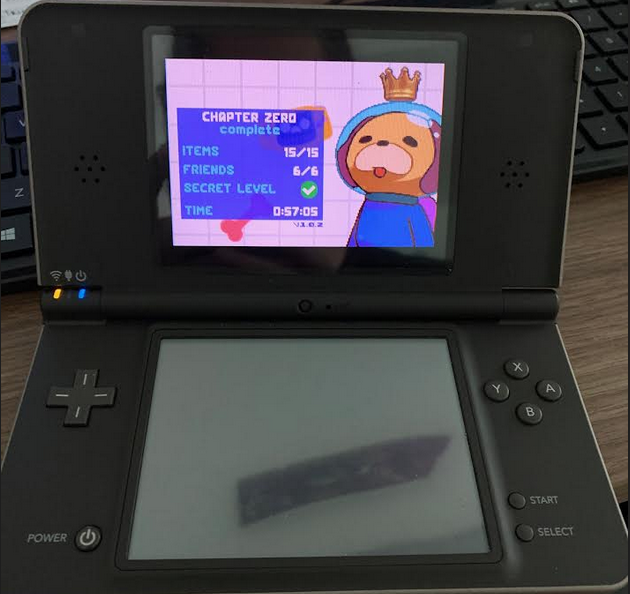 Nice one! Really tempted to get a DSi XL now so I can experience those chunky pixels for myself 😅

Reply
Half Awake Games20 days ago

uhh how do you play pc games on ds?

They're playing the GBA version of the game, likely using GBARunner2.

On DSi you can do this with software mods, or using a flashcart (R4i, etc.)

On DS / DS Lite, softmod isn't an option, but you can also use a GBA flashcart such as the EZFlash Omega or EverDrive GBA X5.

Can confirm this is how I did it, specifically though TWL menu on SD.

Congrats on making me scream with rage :P

What a great game, though! It's very beautiful and (for the most part) fun to play. My only difficulty was the shield-less area, although that might just be a personal preference issue. Good luck with the game and the kickstarter! :)
Reply
dirtxd21 days ago(+4)

this is a lot of fun! maybe a minimap or something would be nice, because sometimes its hard (at least for me) to tell if ive been somewhere before. I really love how you can experience the same place completely differently with just a single key difference (like, as shown, jump height or absence of your gun). looking forard to playing the full release!

Liked the demo. I needed a little bit to get used to the maze-like construction of the world but after that it's been smooth exploring, interrupted only a few times by deaths.

Great work with the Kickstarter too, & there are still 20 days left. We're going to need more stretch goals. :)

The demo is pretty fun! I have to say though i am not a fan of all the instant death stuff like being smushed by the boss or the acid you got to platform across.

Like if you want it to be challenging I feel, for at least a first area, anything killing you after your shield goes down is already enough. The first boss being able to just instantly reset the fight if you dont doge fast enough feels harsh.

That's just my personal taste there, even with my gripes with that, the demo was still real fun! The art and music are amazing! You got the start of somethin great.

sameee. i liked it but al my deaths felt cheap af 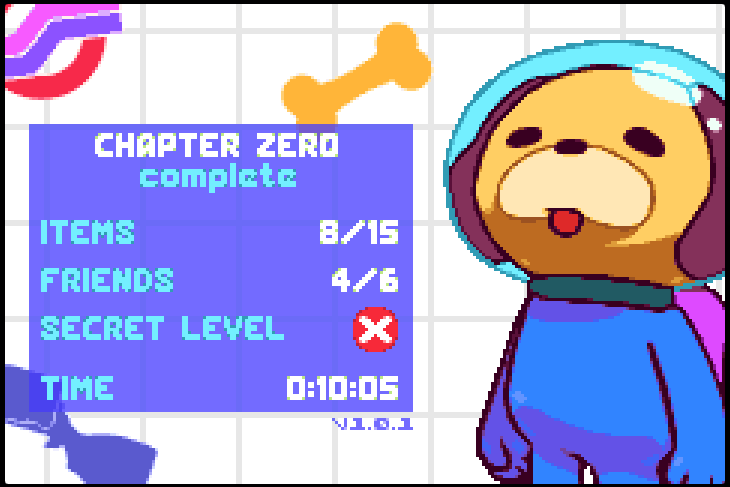 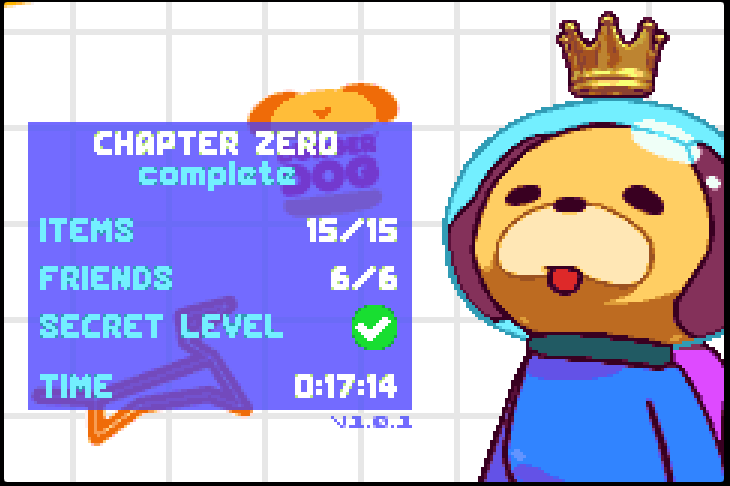 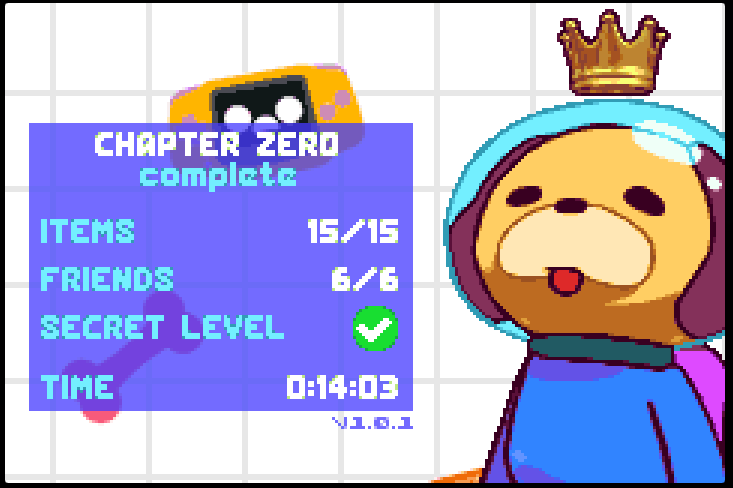 I love this game!

GUYS HELP HOW DO I BREAK THESE 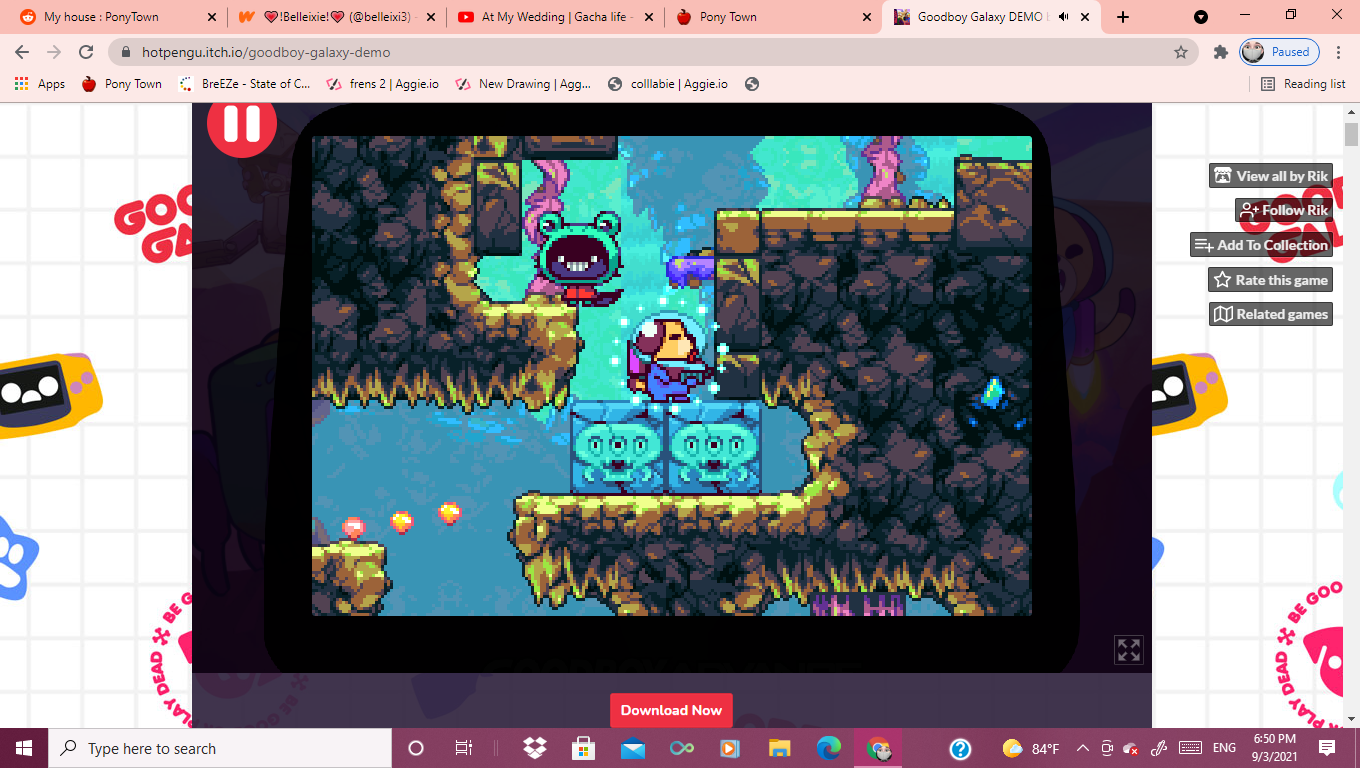 aim downwards with the arrow and shoot!

Congrats, the game is great and really fun. This is not really a a complain but something that puzzle me a bit. The game has disclaimers about the quality of the final product and the quality of the demo. In my opinion the demo is really top notch at the moment. I liked the demo so much that the disclaimer made me think that the final product could have lesser "quality".

Haha!  Thank you!  The demo didn't have as much QA as the full release will, so there was a few bugs (I think we've fixed them all now!)  And there's a few things missing in the demo (like a map screen).

Oh I see. Yes, there are some quality of life improvments that would've been nice like a map, an inventory, an in-game language selection options and audio controls. But I think the gameplay is top notch just like art (music and visuals). Usually when I read "quality" I think of gameplay and art.

FYI, I did got the "jtiles" bug, but after reloading the webpage I could keep playing. It is a good thing you could replicate it and fix it. It was just a softblock, but visually was ugly-looking. I totally can understand how a user might be thrown off after seeing it. However, I think it's a lesser bug compared to the ones you can find in some real GBA games. For instance, in the PAL version of "Legend of Zelda: The Minish Cup" you have unavoidable bug that prevents you from getting the last bomb upgrade. It is explained in this video:


(The bug I mention appears at around 11:33) If nintendo got away with it, you should also get et away with it ;).

1. I think it would've been nice if you could replay the boss, but that's not here nor there.

2. There is a bit of a exploit, since you can reload the webpage and make gems respawn. This exploit can be used for 99 gems item. I don't consider it a bug because maybe that was intended, but it is an exploit for speedruns and such. 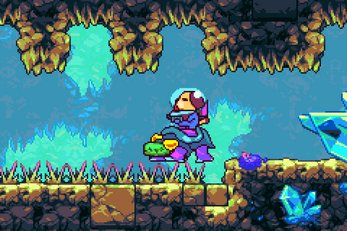 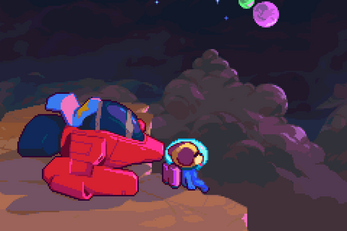 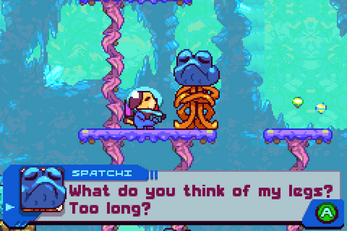